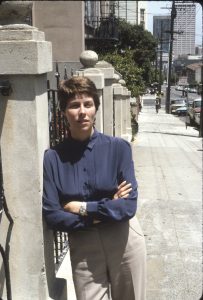 It was through Schietinger and other people at Shanti that the Shanti “residences” were designed around the tenants of the independent living movement that was the leading goal of the Disability Rights Movement in the 1970s and 1980s. The program began with two residences and Shanti’s ability to find flats for gay men living with AIDS to live was not an easy process. After the first year of the program, funded through the city of San Francisco, in 1984 the residence program sought a fourth home, then residence facilities manager Bill Barksdale told the Bay Area Reporter, “I’ve called regarding dozens of houses and flats which sounded as though they would meet our needs, only to be told that because our clients had AIDS the owner wouldn’t rent to us.” By 1984 it was known that AIDS was, and is, not casually contagious; this did not mean that landlords did not see leasing their buildings to Shanti as potentially affecting their property value due to the stigma of AIDS. Until the 1990s, the residence program would remain important and national lauded; but finding a new space to house people with AIDS was a constant challenge.

You can read Helen’s oral history about her time at The K.S. Clinic for the UCSF AIDS History Project here.