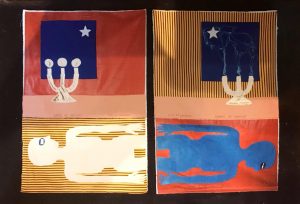 Leave of Absence by Ellie Coiseneau, 1987.

Ellie Coiseneau was the Residence Program manager from 1986 to 1990. Prior to coming to Shanti, Ellie had also worked with senior citizens and the homeless in the Tenderloin and wrote a short-lived column in the now defunct neighborhood newspaper The Tenderloin Times. An artist, Ellie was inspired by The NAMES Project’s AIDS Quilt when it first showed in San Francisco and while she had already worked with quilting materials in her art the impact of AIDS left a mark on her work, as well as her career.