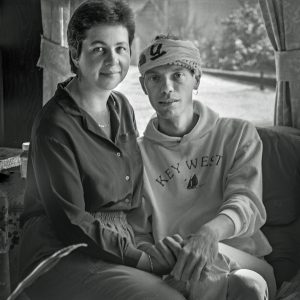 Shanti Project’s residence program operated from 1983 to 1994 and it was the first AIDS specific long term, low cost housing program in the U. S. By 1987, Shanti had 12 “houses” and by the early 90s Shanti had homes specifically for families affected by HIV and women living with HIV/AIDS. If residents had any income, their rent would amount to 25% of it; if the resident had no income or was unemployed their rent would be free. While people with AIDS would sometimes die in their residences, Shanti’s housing program was not a hospice. But, as Ellie Coiseneau told a reporter when she was the residence manager in the late 1980s, “We don’t just offer housing, we offer a home.”

The Shanti houses also provided support groups run by “resident advocates” for its residents and by the late 1980s Shanti worked to provide 24/7 care in partnership with Visiting Nurse and Hospice, Inc. of San Francisco.

From a Shanti newsletter:

“Turning to Lawrence, Beatriz digs into her bag and retrieves two small plastic containers of sequins to give to him…Before he became ill, Lawrence worked in property management and designed costumes, gowns, and kimono’s part-time at a friend’s studio…Beatriz…born an Argentinian Jew, her parents were survivors of the Holocaust and death was a frequent topic at family gatherings as she grew up. Early on she knew she wanted to work with issues of death and dying…Beatriz says, “What’s most valuable for me right now is to communicate the care. I’m left here. I’m left with this life, so I want to carry and…express what accumulated wisdom or recently acquired wisdom that each person who dies has.”