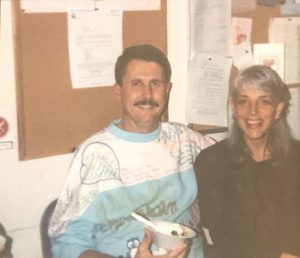 Connections between the Shanti counselors and the rest of the Ward 5b/5a team manifested as forms of friendship. The effect that Shanti counselors had on the rest of the staff was unquestionable. While there were tensions in the work place, at times, this did not negate the importance each profession on the ward had. After being the social worker on Ward 5a, Anita went on to work as the oncology social worker at SF General. She joined a small support group of other city health workers who worked closely with people dying from cancer and AIDS. One of the exercises was to write a poem and Anita Kline began writing poetry. This poem specifically is about the AIDS ward while others are about her time working oncology.

I know him
I said to myself
when Saturday’s front page reported
a local comic’s whimsical wake.
But of course I didn’t.

Rumor on the Ward had it
that the patient in Room 12
had outlived his doctor’s best guesses
with elixir of laughter and wit.

But this audience of one
encountered
no smile, however wan,
no lightness of heart
nor stiffness of lip,
not even a sour sarcastic quip
to dissolve the solid silence of misery.

‘Too fast’
was all he could manage.